They say that the animals are always the first to know, so let's ask them: Who is going to win the Ashes? 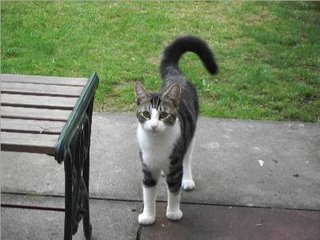 Now the premise is simple. Every possible Ashes result is represented by a foodstuff. Whichever foodstuff Monty and Afridi select will be the outcome of the series. 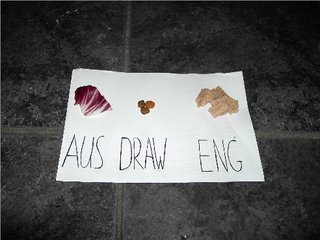 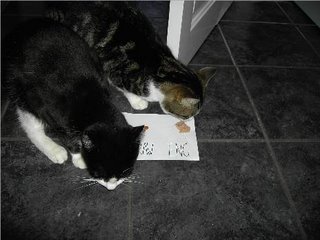 Monty's first to make his decision. He immediately plumps for an England win. Hurray! 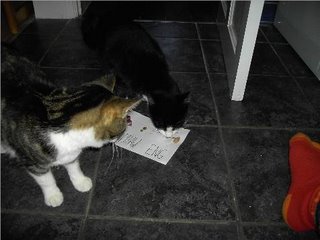 Afridi also goes for an England win. It's unanimous. The animals have spoken: England will win the Ashes! 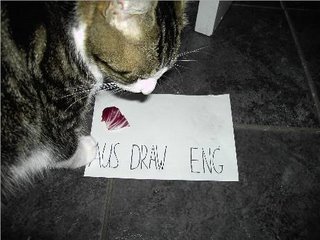 Monty and Afridi subsequently revealed that they consider the draw to be a possible outcome, but they didn't even think about an Australian win. In fact they spurned it altogether in favour of going to stare at the settee for a while.

Should add a bit of interest to the series...Ashes fantasy cricket. I've just registered for free at www.fantastar.com if anyone would care to join?

Talking as a qualified political scientist...just what are the cats' favourite food?

Because if you try and rig a poll, then the insects will get you.

Speaking a a member of the scientical community, I find your methodology impeccable. Have a PhD on Zoopsychology from the dreaming spires of Tooting Bec University.

As a side note, Russel Crowe was on BBC radio 4's Today programme saying that the aussies were going to beat us to a pulp.

There is no fault in this experiment: Lollo rosso is a very posh lettuce and tuna is a not-particularly-nice fish.

one thing ill have to give you Poms credit for no matter how hard the thumb screws are applied you still come back for more ;)

that was a good match i hadnt seen MP bowl prior to this, and he looks like he IS as good as he has been talked up.

Good Luck for the rest of the series and i hope it will be 2-2 soon to make the Boxing day test a real exciting match :D