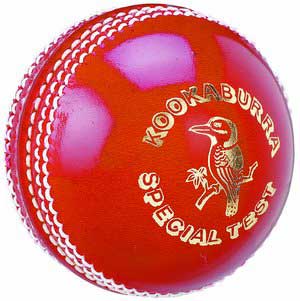 If you think this post is an excuse for England's poor bowling performance - it isn't. It was bad and we'd be unable to defend it. It doesn't change the fact that Kookaburra cricket balls are rubbish though and being as we're in a bad mood, we may as well slag them off. It might make us feel better.

The reason why we hate Kookaburra balls is because of the narrow window of wicket-taking that they provide. We've written before about how we're sick of batsmen having everything their own way. We enjoy a wicket more than a hundred and they're damn hard to come by these days.

The Kookaburra ball has two flaws. Firstly, it has a less pronounced seam than the English Duke ball. This only benefits the batsman. Secondly, it stops swinging after about twenty overs, so that's another weapon removed from the bowlers. Add this to the even-bouncing Australian wickets and clear blue skies and it's game over.

As a bowler, you're just hoping for mistakes for the most part. Experienced batsmen don't make many of these. Take a look at the number of Tests each of Australia's top order has played. They're not going to make many mistakes.

Time and again during the first day at the Gabba you'd see the ball angling into an Aussie batsman's pads. This isn't such a bad delivery if the ball's doing something. The batsman can't close the face and whip the ball into the leg side if he thinks that there could be a bit of outswing or seam movement. With a crappy Kookaburra ball, there's no deterrent. The ball's just going to carry on, straight as an Australian sportsman, so the batsman can do with it what he wants.

Theoretically, this means that England should find batting easier too, but no doubt wickets will tumble and we'll be choking on foul-tasting humble pie.

Stupid humble pie. We've got a freezer full of the stuff.