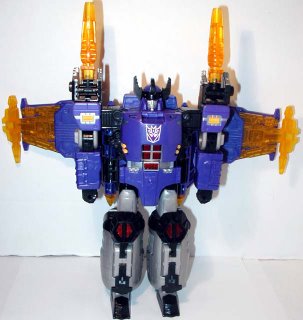 Mark Ramprakash yesterday passed 2,000 runs. That's 2,000 first-class runs. And that's this season alone. Some players barely make that in a career. We're increasingly sceptical that we're going to make it, if we're honest.

Cricket writers always cite instances where a batsman has passed 1,000 runs for the season or whatever. Most of us don't have a clue what that means or how significant that is. We can put Mark Ramprakash's achievement into context to a degree.

Basically, there's a fairly steady stream of run totals until you get to second place and then there's a gigantic jump to Mark Ramprakash. That's how well he's played this season: About a third better than anyone else.

Maybe he really wanted Galvatron (pictured) and his dad said he'd get him Galvatron if Mark could make 2,000 first-class runs this season. Mark's dad would have said this deliberately being certain that Mark would never manage to hit 2,000 first-class runs this season. Well the joke's on you, Mr Ramprakash. You're going to have to fork out for a sweet Transformer now. Well done Mark. Next year you should try for Grimlock.