As you're all aware, Jaffa Cakes are the official sports snack of the England cricket team. In promoting the humble Jaffa Cake as a sports snack, the ECB cited the fact that each Jaffa Cake contains only 1g of fat.

We wondered out loud whether this was actually a significant percentage, as Jaffa Cakes aren't all that big. Well now we have our answer - thanks to SCIENCE! 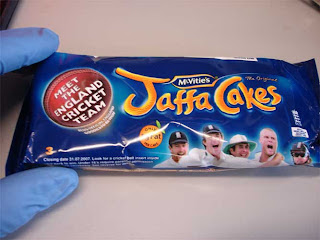 This is the England-branded packet of Jaffa Cakes. There's Paul Collingwood on the left. We bet he likes Jaffa Cakes, otherwise why would he agree to appear on the packet? 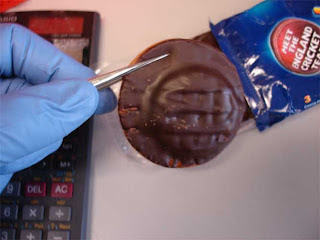 Here's one of the Jaffa Cakes being extracted in scientific fashion. Rule one of science: Always wear gloves. 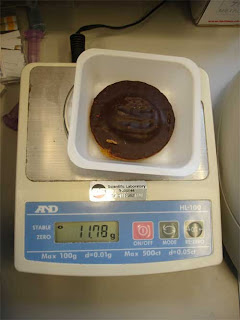 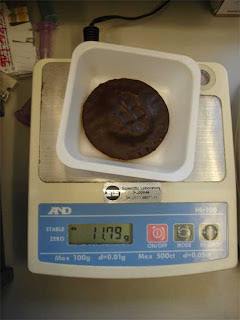 Here's the second Jaffa Cake. It's 11.79 grams. In scientific terms that's 'very close to the other one'. 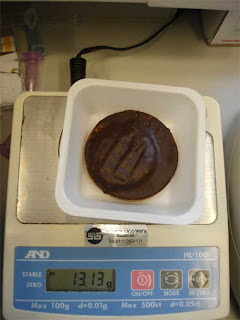 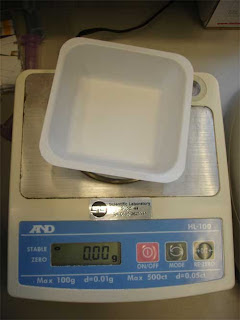 So the mean mass of these three Jaffa Cakes is 12.23 grams. That means that a Jaffa Cake is 8.2% fat. That sounds a lot.

If England fail to win the World Cup and appear sluggish and oversized, you know who to blame.

Shame on the rest of you for not; working in laboratories; always carrying cameras; coincidentally having a packet of Jaffa Cakes; flouting laboratory health and safety; and having nothing better to do.

In the spirit of free and open peer review, all my data is availible though the usual channels. Athankyou.

Having read this, I just want to add why there is a picture of the "how heavy" unit with no Jaffa Cakes. This is simply to demonstrate that I was weighing the Jaffa Cake alone, not the cake plus weighing boat. Obviously.

Also, I've been asked to point out that Jaffa cakes fall within the COSHH regulations in the UK (http://www.hse.gov.uk/coshh/), and as such, must not be directly handled.

Well, there's just over 11g of fat in a 65g Mars Bar, so obviously the Jaffa Cake is the slimmer choice...as long as you don't eat a whole pack of them.

Mr (Dr?) Scientician, I doff my cap in your general direction. Well, I would, if I was wearing one.

I'd have thought that Paul Collingwood was more into ginger nuts, myself.

Jaffa cakes are the end of the line that begins with coffee.
Coffee smells infinitely better than it tastes.
The smell is the only tolerable part of Jaffa cakes. I tried one once; my mouth still goes square with disgust at the memory of the taste and texture.
It is therefore a brilliant choice for a non fattening snack.

scientician are you not a little worried that you are weighting jaffa cakes, surely fruit pastels and meat balls are of higher importance.
Please get your priorities right!